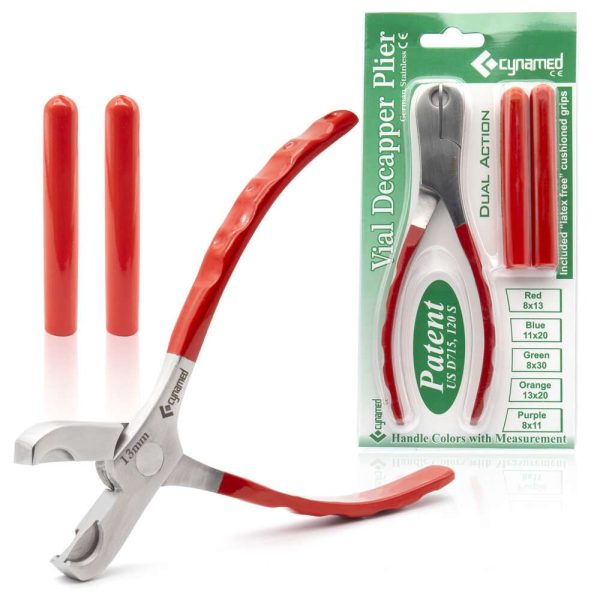 Cynamed Vial Decapper Pliers - Perfect for Decapping 8mm and 13mm Crimped Vials and Bottles $49.99 - $199.95
Back to products
Next product

HIGH-QUALITY CONSTRUCTION –Firstly, the patented 2-in-1 design, and excellent construction of the dual-side Vial Decapper Pliers 8mm/30mm using premium stainless steel enhances its durability. These features offer consistent performance at all times. They won’t break or come apart even after extensive use – the body can withstand considerable wear-and-tear and is corrosion resistant.

FAST & EASY OPERATION –All you have to do is use the plier’s jaws to clamp down on the crimped cap, lock-in, twist, and then remove the aluminum seal. This action of clamping down and subsequent removal completes in a jiffy! This eliminates the possibility of vials breaking or cracking and the medicine spilling out. 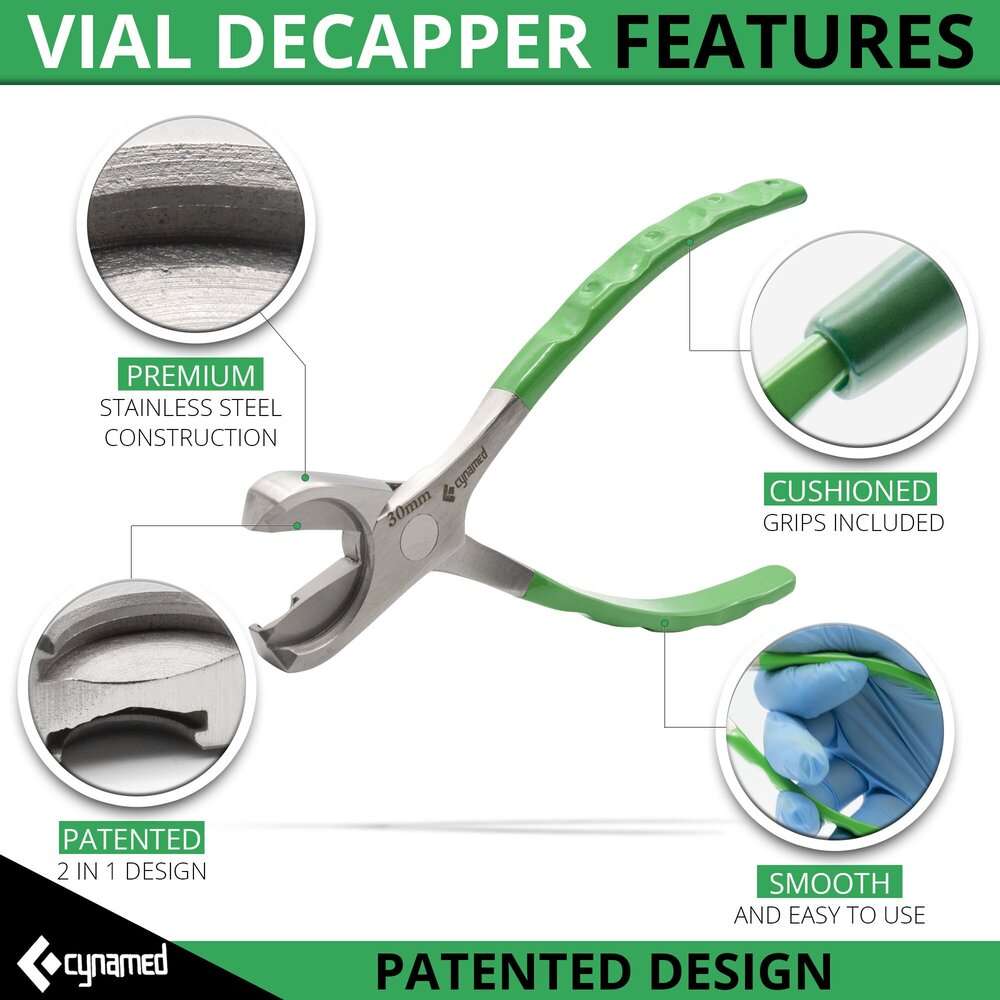 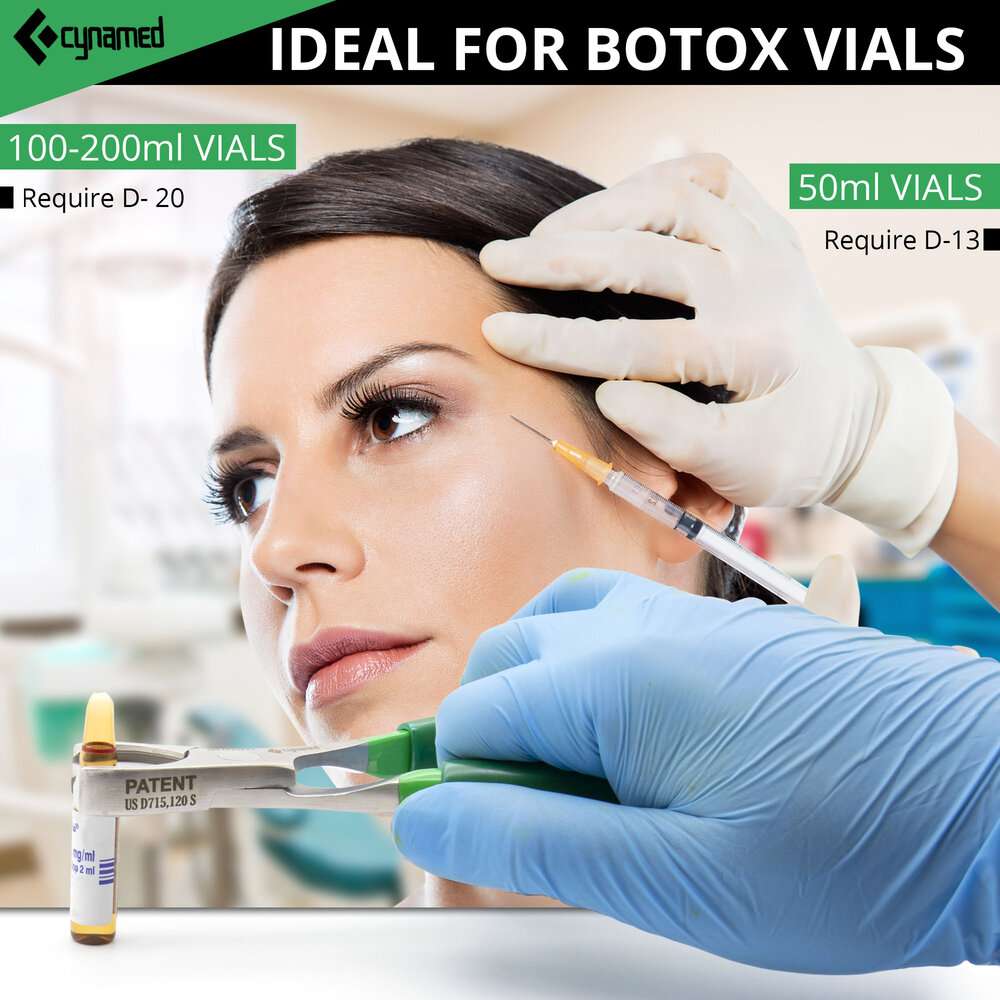 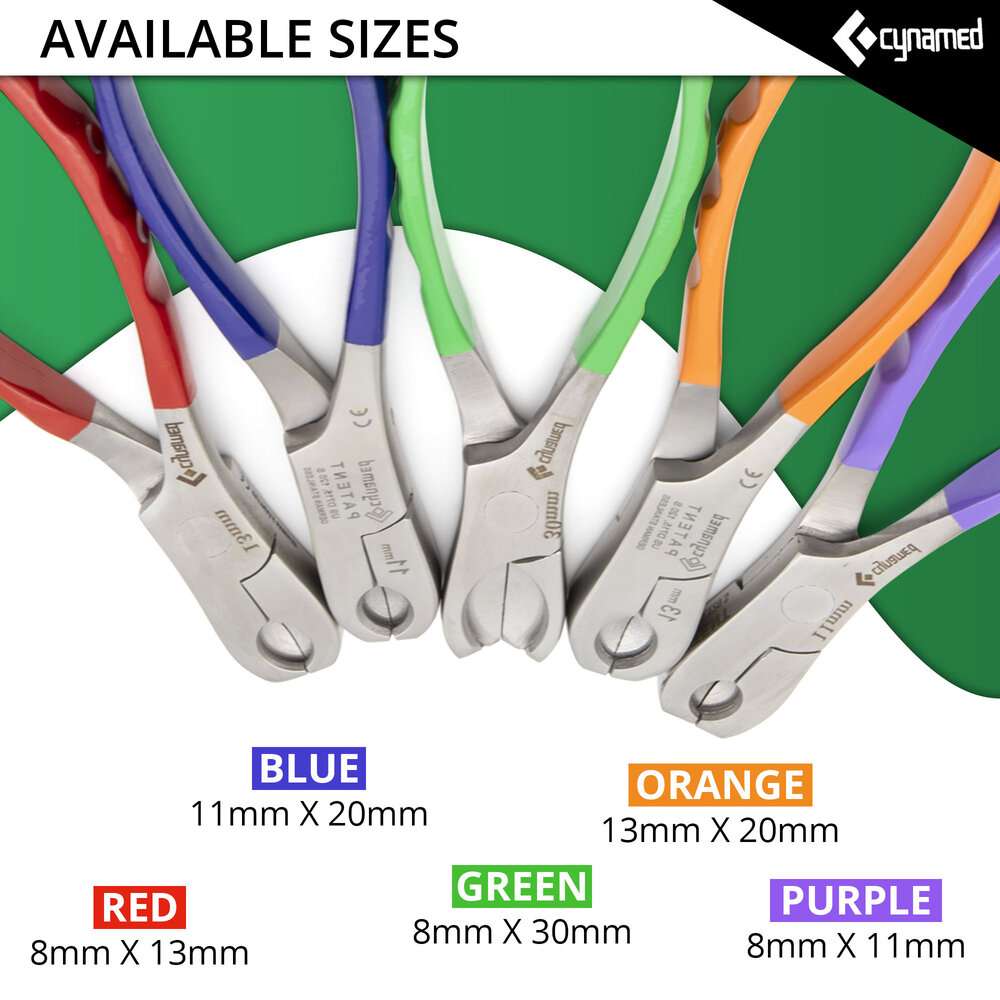 Have you ever tried removing caps of bottles using vial decapper pliers? If the manual aspect sounds frustrating, rest assured, it isn’t so. Cynamed’s decapping pliers are smooth and simple to operate and deliver dependable performance.

Some Other Features Of Vial Decapper Pliers 8mm/30mm

STEADY GRIP –It is crucial to bear in mind that it should be ergonomically designed. For those who decap vials regularly, the last thing they need is a device with a poor grip. When that happens, the pliers might slip from your hands, especially when your palms get sweaty. Repetitive motion that may come with the job at hand can lead to muscle injuries and fatigue too. To ensure the task finishes safely, sufficient friction should exist between the hand and the object. Therefore, the grip should be solid. Unique cushion handgrips include specifically for this purpose. Even when palms become sweaty, the friction is fine, and the grip is steady.

WHAT IS SPECIAL ABOUT THIS MANUAL DECAPPER? –

Decappers are typically handheld pliers used to remove, but not limited to, vial and bottle caps. Most can remove caps of a single size. Still, the dual-action Vial Decapper Pliers 30mm allows the user to remove two different sized caps. It means higher value for your money, as you can remove caps of 8mm and 30mm crimped vials and bottles.

In conclusion, some might still prefer an electronic decapper instead of a manual device, as it seems easier to use – you press a button, and it does what is required. However, it is important to maintain electronic gadgets properly, or else they start malfunctioning. You also have to tweak the settings continuously – it can become tedious after a while. Decapper pliers ensure hassle-free operation with a seamless action of twisting and removing the cap. Therefore, you don’t have to bother about settings and adjustments of the Vial Decapper Pliers 8mm/30mm.

Additional information
FAQS
Yes, using Cynamed Vial Decapper Pliers 8mm/30mm is easy. Yes, it is very durable. This feature ensures its longevity. Yes, there is warranty on manufacturer defect. Yes, it is easy to wash, clean, and maintain. 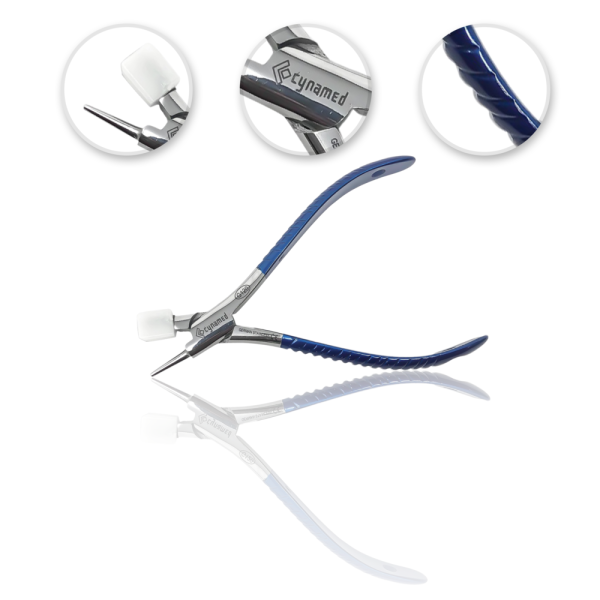 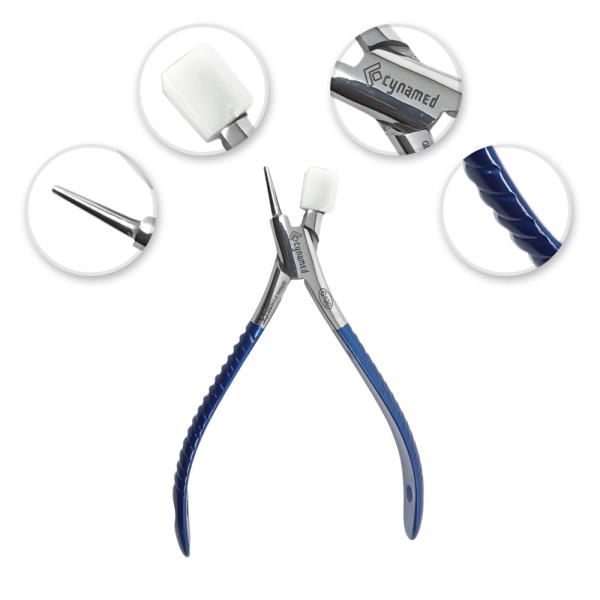 Cynamed Premium Frame Bending Optical Pliers Eyeglasses are the perfect optical tool for fixing or adjusting eyeglasses and other optical/optician tasks. Moreover, they are great for jewelry making, wire bending, and much more crafting work! Most importantly, these pliers have nylon pads, perfect for holding, bending, and straightening parts with a reduced risk of damaging your work. 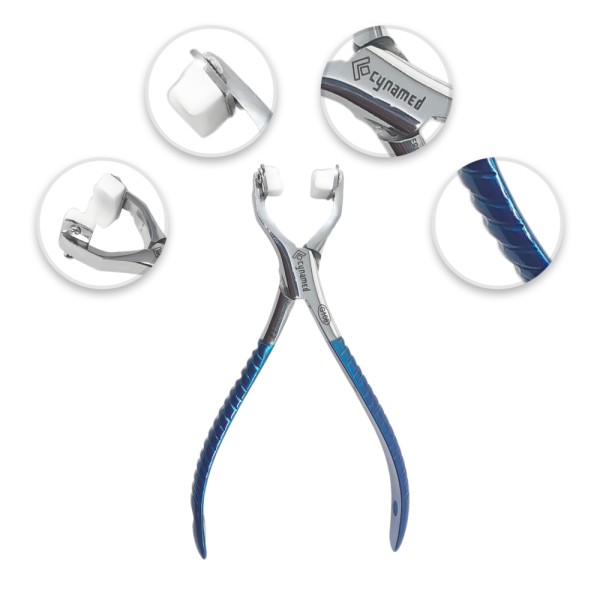 The Cynamed Premium Normal Curve Optical Pliers is the perfect optical plier recommended for surgery. Optometrists who use it say that it makes it so much easier to hold and fix eyeglasses. It offers great torque for the toughest and delicate works. The design of the Cynamed Normal Curve Optical Pliers is perfect for fixing eyeglasses because of the padded pliers. These eyeglass adjustment pliers are also great for jewelry making, wire bending, and much more for crafting work! 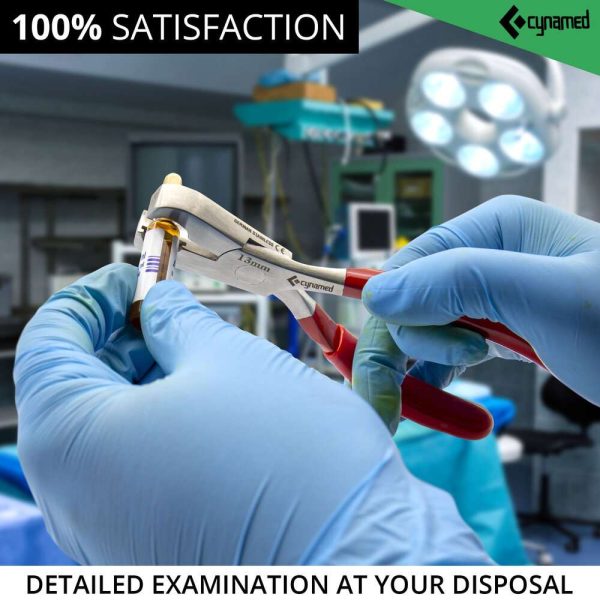 $49.99 - $199.95
HASSLE-FREE – Firstly, you have to know how to make the right adjustments and settings to use an electronic decapping gadget. Even if you have an instruction manual for reference, looking at it continuously is more time-consuming. Do not forget about the maintenance procedures, which make it very tedious. This manual Vial Decapper Pliers 8mm/13mm is a much better option because the action is simple and you do not have to waste time fumbling with knobs and settings. LONG-LASTING –Secondly, these pliers are of the best quality of stainless steel. It can withstand considerable impact and does not get out easily. Even the handles are made of premium stainless steel.

Use the pliers in simple, easy steps: 1.) clamp down on the crimped cap, 2.) lock-in, twist, and 3.) simply remove. You will not have to deal with broken vials or wastage of crucial medicines with our product. The patented 2-in-design of the decapping pliers makes it effortless to remove caps of two different sizes – 11mm and 20mm crimped vials and bottles. The action of clamping down on the caps of crimped vials and bottles and then removing them takes only a few seconds. 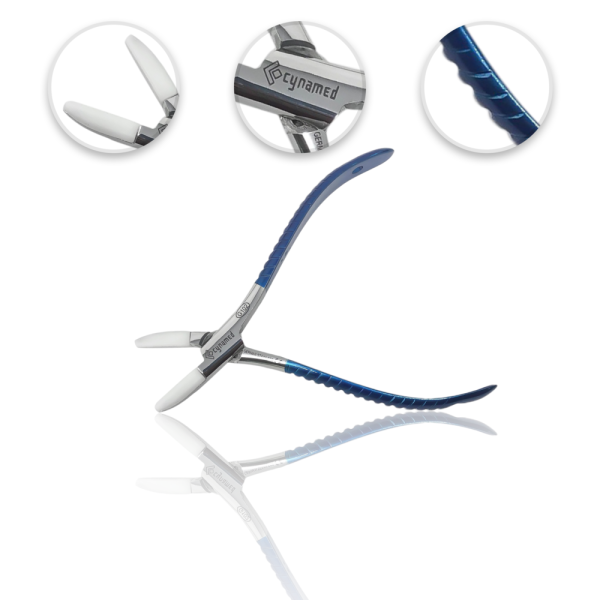 The Cynamed Premium Holding Pad Optical Pliers tool is perfect for fixing eyeglasses. It is also very effective and dependable for other optician tasks. Additionally, they are also great for jewelry making, wire bending, and much more for crafting work! Moreover, these Holding Pad Optical Pliers have nylon pads. This feature makes them perfect for holding, and bending eyeglasses and other optical gadgets. These pads ensure comfort and safety while straightening different optical gadgets. It reduces the risk of damaging your work and sustaining injuries in the process 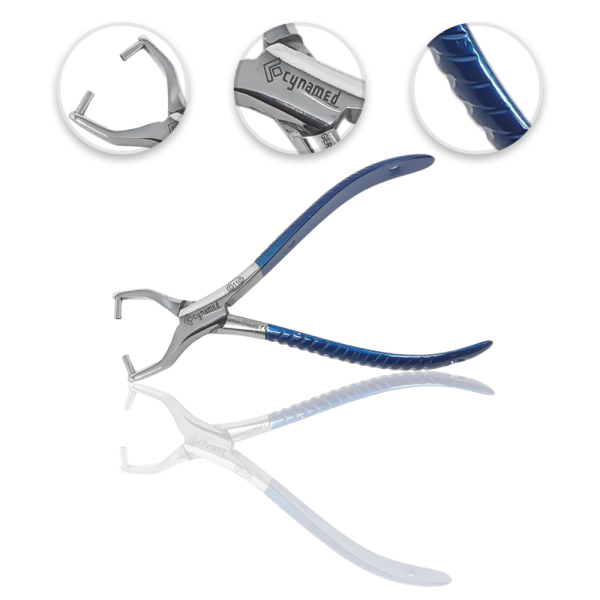 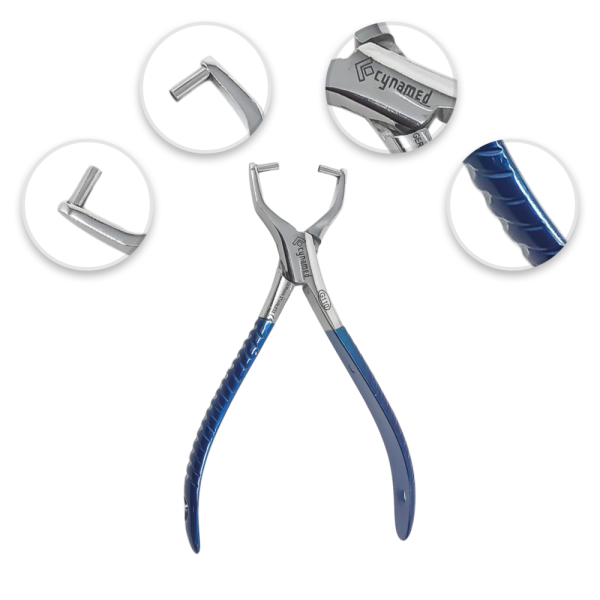 The Cynamed Hinge Optical Pliers are perfect for adjusting/fixing eyeglasses and other optical/optician tasks. They are also great for jewelry making, wire bending, and much more crafting work! If you were looking for the best eyeglass repair tools or something to quick fix eyeglass repair, then this is it. Secondly, these Hinge Optical Pliers have nylon pads, which are perfect for holding, bending, and straightening parts with less risk of damaging your work. The nylon pads prevent damage to the delicate item you may be trying to fix. It distributes the force evenly to minimize any risk of damage to the eyeglasses or jewelry. These pliers are made of Titanium. The Titanium-look gives it an aesthetic appeal, which is unique, and lustrous. Moreover, the Titanium used in making these pliers makes them resistant to extreme heat, ductile, and long-lasting.

Firstly, the Cynamed's Optical Nose Pad Pliers is perfect for fixing eyeglasses. And other optician tasks. They are also great for jewelry making, wire bending, and much more for crafting work!

Moreover, Select pliers have nylon pads, perfect for holding, bending. And straightening parts with reducing the risk of damaging your work.

Most importantly, Titanium-look for an aesthetic, unique, and lustrous appearance.

German-equivalent stainless steel for long-lasting performance and resistance from corrosion.

Firstly, Cynamed Premium Hinge Optical Pliers B Eyeglasses Repairing Plier is the perfect eyeglasses tool for fixing eyeglasses. Moreover, other optician tasks, these pliers are also great for jewelry making, wire bending, and much more for crafting work! Moreover, this Premium Hinge Optical Pliers B Eyeglasses Repairing Plier has nylon pads. This makes it perfect for holding, bending the toughest eyeglasses. Users can easily straighten the eyeglasses parts with a reduced risk of damaging the work. There is less risk of slipping and sustaining self-injury in the process.

Be the first to learn about our latest trends and get 10% off on your order.